Posted at 02:27h in TEE FOR TWO by PeterMitchellMedia 0 Comments
0 Likes 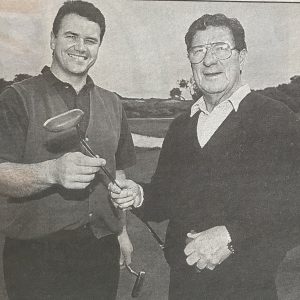 Several years ago, I wrote a biography on Australia’s greatest golfer, Peter Thomson, but I had not played golf with him.

I wanted to find out if he had embraced the world of titanium woods, carbon-fibre shafts and broomstick putters. Would he swear if he missed a short one? Was his love for the game as strong as in the 1950s and ‘60s, when he took professional golf around the globe and set the pattern for today’s world tour? At 67, could he still score something near par?

And I wanted the opportunity to play alongside a Melburnian who won the unofficial world championship of golf, the British Open, five times.

The organising was easy.  Yes, I could join him in a round at Royal Melbourne.

“At least at Royal Melbourne we’ll have plenty of room,” he said.

The last time I played Royal Melbourne was at the 1992 Johnnie Walker Classic pro-am. I lost five balls and almost killed a spectator. “At least we’ll have plenty of room,” I kept thinking.

I headed off with my wife’s parting words ringing in my ears: “Have fun. Remember, you’re only playing with a five-time British Open champion!”

It was easy to have fun at golf with Thomson. He arrived in navy cords, a long-sleeved flannelette shirt and a navy jumper – no hat or visor and not a sponsor’s logo or brand name to be seen.

He had a skinny, “pencil” golf bag over his shoulder. “I prefer to carry my bag around,” he said. “You can walk more directly to your ball that way.” He did not even change his shoes for golf spikes.

The only thing that suggested he was a legend in the game was the ball in his hand. It had the name Thomson printed on it.

We started at the 135-metre 7th hole on Royal Melbourne’s West course to get ahead of a few groups. While I rummaged for a ball, pitch repairer, marker, pencil and tee, Thomson was already addressing his ball. It was not the time to ask about a wager.

By pure luck I upstaged the guest of honour by winning the first hole.

“Very good,” Thomson said as we walked to the eight tee. I thought: “Better not make a habit of this.”

Thomson set a cracking pace. We played five holes in 32 minutes. Just when I thought he must have had a plane to catch, he bent beside a bed of vivid yellow wild flowers in the rough. “Beautiful aren’t they?” He said. “This is one of the last places in Melbourne where you can find these. Most other clubs rip ‘em out. Such a shame. They give a course real character.”

So while I worried about the tea-tree, here was a man who stops to smell the flowers.

On one tee, while I hit a second ball, the champ darted off into the wilds, saying “I think I can find that first one”. He did!

Peter Thomson played his last British Open 22 years ago, but he attends every championship and calls the action for the BBC.

He is a commentator at men’s and women’s events in Australia for the ABC and is the longest-serving chairman of the Australian PGA.

In September, he reinvigorated his competitive juices as non-playing captain for the President’s Cup international team.

The US narrowly won, but importantly for Thomson the event looks certain to come to Melbourne next year.

Thomson owns homes in Toorak and Port Douglas, has been with wife Mary for 36 years and last October they became grandparents for the eighth time.

His golf course architecture company, Thomson Wolveridge & Perrett, has 10 projects at various stages of study, planning and construction throughout the world.

One of them is Crown Casino boss Lloyd Williams’ new Capital Golf Club at Dingley. Thomson describes Williams as “an inspiration, a visionary”.

Another project is an 18-hole course at the home of golf, St Andrews, Scotland.

The home of his ancestors, Thomson adores Scotland and in particular, St Andrews. Look at any of his golf course designs – in Asia, Europe or Australia, and you will find a piece of the Old Course.

His tastes are classical. Built almost by Mother Nature, the Old Course evolved as weather-beaten seaside links over centuries.

He tells clients that Augusta National, home of the US Masters and the venue of most hackers’ dreams, “has become so artificial”.

“It looks like the whole thing has been laid with mod-grass. The sand in the bunkers looks artificial. Mod-sad. There’s even mod-water with all the ink they put in Rae’s creek.”

Kerry Packer once described Thomson as “pre-historic”. Others prefer “old-fashioned”, but scratch the surface and you find a very ‘90s man in Thomson.

He drives a modern car off the course and a metal wood on and his favourite television program is the science show Quantum. Unlike many 67-year-olds, he welcomes technological advance and even surfs the internet.

His humour is drier than the Nullarbor.

At the 14th tee, with the pace taking its toll, I smacked a drive towards Beaumaris Beach.

“I think you might need to get rid of that club,” Thomson said, looking daggers at my $350 metal one-wood. “You may not be suited to it. Let me see it.”

With my heart in my mouth he examined it and addressed an imaginary ball. Then he handed it back to me. “No you should be able to get them away OK with this. You’re obviously doing something wrong. The aim and the grip are the important things.”

An unsuccessful Liberal candidate for the state seat of Prahran, Thomson gets his political thrills from son Andrew, the federal member for Wentworth in Sydney.

He believes Andrew “might go far”. But, he adds, “in politics you can never tell”.

Despite his strong Liberal Party links, Thomson is not afraid to criticise the Kennett Government’s vision of the new Melbourne.

“I approve of the casino, but it should have been down at St Kilda,” Thomson says. “Originally, of course, the Tennis Centre should have been built further down the river. Recently they were talking about upgrading Olympic Park. Ludicrous. You’ve got the MCG, Tennis Centre, Sports and Entertainment Centre all cheek by jowl.”

I was glad I had not raised a prospect of a wager. Even with handicaps the five-time British Open champion would have taken me to the cleaners.