Posted at 04:24h in TEE FOR TWO by PeterMitchellMedia 0 Comments
1 Like 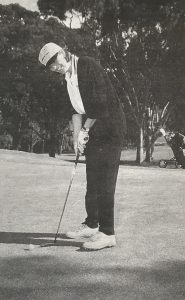 Stress given the ‘Flick’ on fairway.

As Felicity Kennett works in her Surrey Hills kitchen preparing the evening meal, she often glances at a photograph on the wall above the sink. It shows her in perfect balance at the finish of a long, lusty swing to officially open Albert Park’s new multi-level driving range.

A crowd stands behind her with mouths open, and alongside is former British Open champion Ian Baker-Finch, wearing a bemused expression that suggests he is lost for words.

“You can’t see it, but the ball’s still between my feet,” says Mrs Kennett with a chuckle. “I had three air shots before I finally hit the thing.”

The picture is a constant reminder of the pleasure brought to her life by golf.

When my golfing invitation arrived, Mrs Kennett, or Felicity, or “Flick”, depending on how well you know her, was quick to nominate Burwood’s quaint little Wattle Park public course as her preferred layout.

“Wattle Park does me fine,” she said in the car park as she changed into her spikes.

“It’s a lovely little course, just around the corner from home, and it doesn’t break the budget. I only ever play nine holes. I get a bit tired after 18.

The Premier’s wife, wearing navy blue slacks, white golf shirt and navy cardigan, said she finds some private clubs a little too serious, and I could see why.

She proceeded to laugh her way around the two kilometre, par-32 course, calling her clubs “sticks” and divots “bits of dirt”.

And she had a novel way of counting her score. She started each hole with 10 tees in the right pocket of her cardigan and, with each stroke, shifted one into the left pocket. “If I get to the end of the hole and I’ve got one tee left, I know that I’ve scored nine.”

While most of Victoria is well aware of her husband’s view of Melbourne as the sporting, arts and major events capital of Australia, Felicity has a different view of the city. You can see it standing on Wattle Park’s second tee.

“Now, just have a look at that,” she said. “Isn’t that marvellous?”

And it is. On this sunny day, Melbourne was a picture postcard in the distance at the end of Riversdale Rd.

“Anglesea is lovely, too,” said my partner. “Jeff and I often play there. He really loves a game of golf.”

“And how about those kangaroos?” I ventured.

“Oh, just marvellous. We had some German guests out there not so long ago. We took them to Anglesea to play and they were nearly in tears with excitement. They just could not believe it. That was when we took them on a car ride through the Western District. Quite an expensive car ride it turned out.”

Oh yes, the infamous day the Premier was nabbed by radar doing 143 kmh but escaped with a $110 fine.

My third shot at the par-5 second hole was a dreadful hook. It shot off over the boundary and my partner and I both winced as a loud clang reverberated across the course. I pictured the homicide squad detectives waiting for me at the clubhouse.

At the next hole, a par-3, I was happy to see Felicity was still smiling. “What club should I use here?” she said, following a duffed tee shot.

I suggested a 6-iron.

“No, I’ll go with the seven. I’m never sure if my six iron is meant to be a nine or vice versa.”

After another one-tee-left-in-pocket score, we were approaching her favourite corner of the course. “It’s beautiful here. You wouldn’t even realise Warrigal Rd is just metres away.”

Wattle Park’s fourth and fifth holes play across a little creek that meanders peacefully through a section of dark forest. Felicity calls it “The Vortex”, defined as “a mass of swirling fluid, swallowing or engrossing all that approach it”.

It all seemed rather eerie.

Then I saw him. A young, unshaven man stripped down to his flesh-coloured underpants, climbing out of the water with a fistful of golf balls. “Who’s that?”

“Oh, there he is! He’s great isn’t he? Always fishes about in there,” she said, darting off in his direction. “This is the only golf course where you can lose your ball one minute and buy it back a few minutes later.”

Her folding buggy was a Christmas present from the Premier, and she uses Greg Norman signature “Shark” clubs with carbon fibre shafts.

“I saved up my money and bought them brand new. My boys all use second-hand sticks and they were a bit miffed. They think this is just a passing phase, so I have to keep playing to prove the little buggers wrong.”

“Long ago I told Jeff that we needed to keep them out of the spotlight. They’re the ones who have to go to school the next day. Kids don’t need that.”

You would never know it by watching her stride around the golf course, but Felicity maintains her background is completely and utterly non-sporting.

“I’ve been the same height (172cm) since I was 14, very gangly, so at school I cultivated my speaking voice to get out of doing sport.”

At Lauriston Girls School in Armadale, Felicity was the first to volunteer for duties on the public address system. “My hand-eye co-ordination was pathetic. So you’re damn lucky I turned up today.”

Now, she is addicted to golf, or more precisely, golf at Wattle Park, and with the same three friends. And the score, while duly recorded, is irrelevant.

“What we’ve done is committed ourselves to each other, not the game. I don’t play for the score. I play for the fun and friendship. I never realised what a difference the game of golf would make to my life.”

“Well, we were all involved in fundraising lunches for the Victoria State Opera, so we all knew each other well, and I’m sure it was a conscious decision on their part to say, ‘this girl needs to get out’, and I did. I really did.”

The reason? Three simple initials. KNF. The bitter political stoush that not only forced the closure of the Premier’s family business, but left Felicity carrying suitcases of emotional baggage that she simply could not lose.

In 1971, Kennett, Nicholls and Feegan, supplied the initials for what was to become a successful suburban advertising agency, but over the years it was Felicity at the coalface building its reputation. In 1993, the ALP, smelling blood, pounced on a conflict of interest campaign.

“I didn’t know how to fight back. I felt really guilty. About the people we’d employed, about the clients, and about Jeff’s business. I mean he’d had that since he was 22. He said, ‘Come on, let’s close it down, you can get out and enjoy life’, but internally I was thinking, ‘Oh, how could I let that happen?’

“The urban myth is that KNF did something wrong, but we never did anything wrong. We actually closed because it had become such a public venue. They office was staked out by the media. My clients didn’t like being mentioned in parliament by David White. Between October and December of 1993, I lost around 50 per cent of my clients.”

“What it boiled down to, was how do you ‘get’ Jeff Kennett. You can’t get him politically. There’s only one way to get him. Go straight through me. I didn’t realise or understand how much I’d be affected by its closing. I’m still really wobbly about it today.”

By now, there were tears welling in her eyes.

No one should doubt the medicinal qualities of golf.

Felicity was soon laughing again when she missed a shortish putt, and immediately blamed it on her son Ross. “He showed a bit of temper with his putter, so it’s a little bent. It’s all his fault.”

She had happily settled into a solid run of triple-bogeys, so I thought I’d try a different political tack. “Have you met Mrs Brumby?”

“Oh yes. They go to the same things we go to. I find her like I was once, trying to juggle children and schooling and a husband that’s never home. She’s probably taking the same attitude that I did, which was not make yourself too upfront.”

“But surely you discuss politics with your husband?”

“No, I stay out of the politics of his life. You can get yourself into trouble that way. He comes through the double gates and he’s home. Jeff’s good at taking off that coat.”

Last year a new door opened for Felicity as a presenter on Channel 10’s Healthy, Weather and Wise. Out of the blue, she was approached by the show’s executive producer Gavan Disney.

Premier Kennett hired a big screen at home and sausage rolls were passed around at a small gathering of friends to celebrate Felicity’s television debut.

“I think he’s really happy that I’ve got something that I’m happy doing.

“We’ve been married for 24 years, so there’s a lot of things that you just don’t need to say to each other when you’ve been together that long.”

Despite her crook putter, my partner just missed out on breaking 70 for the first time at Wattle Park, but I was left in no doubt that she thoroughly enjoyed the round. We finished our chat and she headed off to a meeting to discuss Healthy, Wealthy and Wise’s plans for the new season, which begins on Channel 10 tomorrow night.