Posted at 02:24h in TEE FOR TWO by PeterMitchellMedia 0 Comments
0 Likes 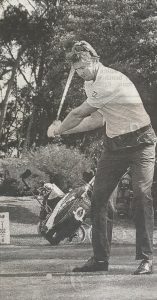 He has the handshake of a gladiator.

He is a 1.98-metre blond Adonis possessing two Olympic gold medals, driving a red sports car, carrying with him more than a touch of a larrikin and holding down a full-time job as a merchant banker.

Yet, for someone who has also achieved every golfer’s dream of a hole in one, James Tomkins has one major regret.

He never actually saw his ball roll into the cup.

For the amateur golfer, this is like winning front-row tickets to a Three Tenors concert, but being forced to wear earplugs.

It was during the 1992 Coolum Classic pro-am in Queensland.

At the tough, third hole of 195m, playing alongside successful pro Terry Price, Tomkins knew he had hit a beauty, but the bottom of the flag was hidden behind a mound.

“When we got to the green, I couldn’t see my ball anywhere. We looked around the back and in the bunkers, then someone said: ‘Have a look in the hole.’ And there it was!” he said.

“I felt completely ripped off.”

Now, whenever he tells anyone he has a hole in one to his credit, he has to add a footnote : “But I never actually saw it go in.”

Despite that unhappy memory, the Oarsome Foursome member was happy to join me at my club in Frankston.

A long-time member at Kew, off a 14 handicap, Tomkins arrived ready for combat.

His two-tone spikes were spotless, his bottle-green trousers immaculate and he wore the white polo shirt of the French rowing team.

“Swapped it for one of mine in Atlanta,” he said.

His armoury was also impressive. His black, lightweight King Cobra golf bag had been obtained a few years earlier when the “foursome” was in the same management stable as Greg Norman. I could even detect the lettering on the bag spelling out the “Shark’s” name. It had been blackened over.

Then he pulled out his “big gun”. A state-of-the-art Cobra Ti driver, the one with a titanium head and carbon-fibre shaft, the model Norman uses, the one that only the deadly serious go out and buy, the one that retails for $535.

A huge Norman fan, Tomkins secured an audience with the great man at a charity dinner in Melbourne late last year.

“I spoke about Olympians only getting the chance to climb the pinnacle once every four years, whereas in that time he has 16 majors. He said it was about making the most of your opportunities whenever they come along,” he said.

Tomkins belted his opening drive a long way down the fairway with a crisp, powerful swing. I asked him about that driver.

“Well, that famous southern hospitality in Georgia was just amazing,” he said.

The rowers at Atlanta were housed at a university near Lake Lanier and with the Butternut Creek Country Golf Club opposite, the “foursome” was invited to use its facilities.

“I had no idea how beneficial the golf would prove. Once we were on the course, driving around in the carts and mucking about, I realised it was the first time since I’d been in Atlanta that I wasn’t thinking about the race,” he said.

In the company of a generous member, Tomkins admired the Cobra Ti driver he was using. It immediately became his property.

“It was unbelievable. ‘Donno’ (coach, Neil Donaldson) got a full set of irons from this bloke and Mike (McKay) was also given a driver,” he said.

Born in Sydney, he was three when his family moved to Rosedale, in Gippsland, because of his father’s employment with paper manufacturing giant Amcor. His first memories of golf were at age five, tagging behind his parents and swiping at the odd ball as they enjoyed a round at the Sale Golf Club.

When Tomkins was 10, his family moved back to Sydney then, a few years later, settled in Melbourne.

It was at Carey Grammar that he was first introduced to rowing.

Tomkins also loved football. An agile ruckman, he was selected in Hawthorn’s Crimmins squad for junior boys and was later drafted to Melbourne, playing five reserves games for the Demons in 1989.

“I was great at training, but kept watching the ball go over my head in matches. Melbourne suggested I get a few games under my belt in the VFA. I told them I was going back to rowing. I was better at it,” he said.

Eight years later, he cherishes the life-long bond forged with his rowing teammates as much as he does his Olympic gold medals.

“That’s the great thing about a four, we’re really like brothers. You have to be to have the rhythm. We have to know each other inside out,” he said.

By the fifth hole, he had found his rhythm.

He made a mockery of the seventh, a par-four 240m, by blasting his drive on to the green!

His eagle putt scraped by the cup and he tapped in for a ridiculously easy birdie.

I raised the topic of Sydney 2000. He will be 35, but like many of our veteran Olympians, he sees a home Games as the carrot dangling before the donkey.

“I’ll decide within 18 months. I don’t want to be like a boxer who has one fight too many. But to compete in a home Olympics would be sensational. All things being equal, we’ll have a bit of a dip,” he said.

Meantime, there is plenty to claim his interest.

He is on the end of grief from workmates over committing himself to Bridget, his girlfriend of almost five years.

For now, he is having fun teaching her the game of golf.

Then there is work with ABN Amro, a Dutch merchant bank in Collins St.

“No one’s even heard of them, but we’re the 12th-biggest bank in the world. I’m in their leasing area, financing capital equipment. It means I get out a fair bit, which is great. I don’t want to be stuck inside an office every day,” he said.

As for the other two most important things in his life, his gold medals, they now reside in the MCG Museum.

“Whenever I want them, I’ll be able to get them back, but it’s great they can be on display. I just had them sitting at home. They’re safer there than at my place.”

As he rushed off in his red sports car to meet his girlfriend, I did not have the chance to tell him that despite not holing a decent putt for the entire round, he had played Frankston’s last five holes in even par.

I have a feeling we will be watching him again come Sydney 2000.