Posted at 02:39h in TEE FOR TWO by PeterMitchellMedia 0 Comments
0 Likes 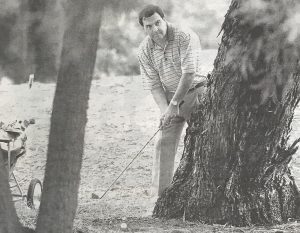 The rigors of his job demand he be on call 24 hours a day. But when he can escape, Victoria’s Cheif Commissioner, Neil Comrie, likes to work on his golf handicap.

Not many people would know Neil Comrie has a cheerful, engaging smile.

His public face is rarely given the chance to show it.

On the golf course, however, it is different. Here, the man in charge of 330 police stations, 12,500 staff and a billion-dollar budget is able to relax.

We were guests at the beautifully manicured Metropolitan course in South Oakleigh, home of this year’s Australian Open championship.

Comrie’s enthusiasm was evident from the start: “I simply can’t find the time to play regularly. It’s something I plan to pursue when I retire.”

Wearing beige trousers, a plain shirt and white shoes he looked similar to your average club member, as we started at Metro’s 10th tree, but for two things.

His clubs were few in number, “collected randomly during the years”, and, attached to his belt, was the latest in high-tech pagers. It is switched off only to change its batteries.

Comrie is on call around the clock, 365 days a year, even on holidays: “It’s part of my job. I have to be contactable at all times.”

“That must be extremely difficult?”

“It is. There’s no doubt this job takes its toll on family life. Policing generally has quite a few marriage casualties. If you can get through those highs and lows you’re doing well.”

Comrie is 13 years into his second marriage. He has two children from his first marriage, a son, 25, based in Perth, and a daughter, 23, in Queensland.

“I’m quite protective of my private life. I think that’s the balance in this job… that’s the saving grace. You’ve got to devote a lot of time to get that right because it allows you to escape from the other part.”

“And what’s your escape?”

“I’m a keen gardener and I like working with my hands. I do a bit of carpentry, that sort of thing. Anything that’s different from my normal work.”

Despite its lack of use, Comrie’s golf swing served him well. He obtained a creditable bogey at the short par-three 11th, then it was a consistent run of double-bogeys.

It is almost five years since Comrie ended a brief stint as assistant commissioner in Queensland to replace the retiring Kel Glare as Victoria’s Chief Commissioner. His term expires at the end of this year: “I’ll have to talk to the Government towards the end of the year. They decide whether to re-appoint or not. The ball’s in their court.”

Softly-spoken, Comrie seemed to choose his words carefully, regardless of topic. He showed good humour all the way, but his manner did not change.

Even when he almost holed a 10-metre putt on the 15th, he simply smiled warmly. Our police chief is not one to punch the air with excitement.

He sounds much like a chip off the old block.

“My father was a reserved sort of fellow,” he said. “Never one for overt expressions of anger or pride.”

Murray Comrie was a policeman in Ballarat when Murray Jnr. was born. To avoid confusion Murray Jnr. became known by his middle name, Neil.

“We moved around a lot when I was young,” Comrie said.

“Ballarat, North Essendon, Castlemaine, Carlton. I went to six different schools along the way. But it doesn’t seem to have affected me in any great way.”

For almost 100 years the name Comrie has been involved with the Victoria Police. Neil’s grandfather, Angus, joined the force in 1899 as a first constable.

“Then my father became a chief superintendent. He finished up at Russell St and retired in 1972,” he said.

“Did he inspire you to become a policeman?”

“No, I made up my own mind. After leaving school I did some clerical, accounting-type jobs that I didn’t like. I was working for an insurance company and sitting next to me was a bloke of about 50, who was doing exactly the same work as I was.

“I set off that day to the old police depot in St Kilda Rd and got an application form. I never discussed it with my father.”

Now, Neil Comrie is about to turn 50. He has worked in almost all areas of policing, from an operational officer in busy inner-suburban areas, to a sergeant at Coburg, through to the licensing, gaming and vice squad, and the homicide and major crime squads.

“I think I can relate to the troops out in the field,” he said.

After 30 years in the force he has one major regret.

“My father died in 1983 after a long illness, so unfortunately he didn’t get to see me reach my present position, which I’m sure would have pleased him greatly.”

By now, Comrie’s round was beginning to come unstuck in Metropolitan’s notorious bunkers. I tried to lighten things a little.

“In your opinion, what’s the best police program on television?”

“Well I don’t get much out of the American police shows. They’re all a bit far-fetched. The Bill is probably about as close as you can get to the real thing. I don’t always get a chance to see Blue Heelers, but that’s pretty accurate. We actually provide some factual advice to help them with their storylines.”

The same could not be said of his golf during our closing three holes.

Two nines and an inglorious 10 made for a bitter finish, but Comrie seemed to take it in his stride.

“That’s the thing about this game. You’re going along OK then suddenly the wheels come off.”

He laughed when I pointed out that at least he had not lost a ball.

As Comrie placed his fold-up buggy into the immaculately clean boot of his Ford Fairlane, I noticed the portable blue light tucked away in the back.

“I can use it if I want, but I haven’t in over four years… I’ve issued a few tickets though.”

“You mean as police chief you’ve pulled someone over?”

“Well, you have to when you see someone’s driving is extraordinarily bad.

“One day, myself and two assistant commissioners were going to Ballarat. This fellow went flying past us – he must have been doing 150kmh. He certainly got a bit of a surprise when he saw the three of us pile out of the car.”