Posted at 02:47h in TEE FOR TWO by PeterMitchellMedia 0 Comments
0 Likes 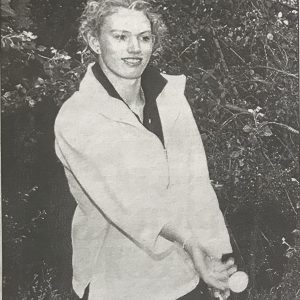 On Thursday night at Olympic Park, Emma George set a world pole vault record of 4.55m. She honed her skill as a teenage trapeze artist with the Flying Fruit Fly Circus. Now she has her sights set on reaching new heights at the Sydney Olympics.

It should not be long before Emma George achieves one of her short-term goals.

You may see her on Port Phillip Bay off Brighton, sitting with her boyfriend beneath the canopy of their dinghy, lines dangling in the water.

Together they search for that nice, big snapper. The one that has so far eluded them.

But Emma George is determined. And patient. For her, it is simply a matter of time.

The 22-year-old loves a challenge, so she leapt at my request for a round of golf, although it had been more than a year since her last hit.

We managed to get a game at Riversdale Golf Club, Mt Waverley.

“I hope you’ve got some patience,” said Emma. “I’m a pole-vaulter, not a golfer!”

She pulled her own buggy and had a full set of clubs housed in a blue Greg Norman signature edition golf bag.

“Mum and Dad bought them for me and they use them more than I do,” she said.

“I found two wine glasses in the bag from the last time they had them. They love golf.”

Her golfing attire consisted of navy shorts, a white top over a navy shirt and runners. Her red mane was tied neatly in a bun.

She mentioned that on one of her few golfing outings she hit a member of the ground staff driving a mower. “Got him right in the arm. But he was OK, thank goodness!”

After that, I stood well behind her for each shot.

For someone who does most of her best work in the air, Emma had a lot of trouble lifting her ball off the ground.

Her powerful swing was all arms and no wrists.

She cold-topped two balls straight into a little creek that runs directly in front of the second tee. “It’s OK,” she said. “I’ve got plenty of other ones.”

Emma is into her final year of an arts-commerce degree at Deakin University, Burwood, majoring in Indonesian and marketing.

“When I finish uni this year I want to work part-time,” she said. “I think I’ll use my commerce degree more than anything, and just start working.”

Working is something Emma has been doing for some time. After finishing Year 12 at Albury’s Scots College in 1992, she saved enough for an air ticket and to defer a science course at Monash University. She took off alone for a year-long working holiday “doing Europe”.

“No, it was fun,” she said. “I started off in London. Luckily I got a job as a receptionist at Michael Caine’s restaurant.

“I saved a bit of money, then Mum came over and we spent two weeks driving around Portugal and Spain. Then I toured through Europe with a friend, working all the way, washing dishes, that sort of thing.”

When Emma arrived home, science had well and truly lost its appeal. She moved to Melbourne and her focus shifted on to something she had always enjoyed at school – athletics.

By the time we reached the fourth tee, my scoring pencil was blunt. After her eight at the first, then a 10, followed by another eight, we agreed to forget about the score and concentrate on playing some good shots.

My partner just wanted to send them flying into the air, and let out a shriek of joy when at last it happened.

In the early 1980s, Noel and Merron George took their young daughter to Albury to join the Flying Fruit Fly Circus, an outfit specialising in acrobatics and gymnastics for all ages. Emma ended up balancing on her head on top of a stack of chairs.

“I loved all that, but the main thing that was really beneficial to me was the trapeze,” she said. “That’s where the best part of my vault, the swing, comes from.

“If I hadn’t done that for four years, there’s no way I’d be jumping the kind of heights that I have.”

When Emma first broke the world record in the women’s pole-vault, a huge party was thrown at her parents’ home in Beechworth, in north-eastern Victoria.

As the guests arrived, Noel pointed up to a long chalk line he had drawn across one side of the house. With great pride he told them: “That’s the height of Emma’s world record.”

He has had to make a few changes since. Since Thursday, the line stands at 4.55m.

“My parents have never pushed me, and have always been there,” Emma said.

“All it takes is a phone call from me and Dad will drop everything to do all my running around and Mum will sometimes do some cooking and send it down so I can put it in the freezer.”

Along with her university studies, Emma trains six days a week, with two sessions each day, morning and night. And not just vaulting practice. There is sprinting work, and two circuits of weights and gymnastics. “I do take Sundays off,” she said.

The Sydney Olympics are her long-term goal, but within a fortnight comes her first real test. The World Indoors in Paris.

It will be the first time the women’s pole-vault has been held at a world championship level.

“I don’t really think of myself as a world record-holder,” she said. “I know that if I held the world record in the 100 metres, I would think that was pretty good. But, because the pole-vault is still a new sport for women, I don’t see it as being a great achievement.

“My aim is to jump a lot higher, so that I can say, well, I really do deserve this record.”