Posted at 02:17h in Uncategorized by PeterMitchellMedia 0 Comments
0 Likes 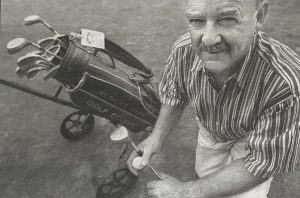 His passion for sailing led Ian Kiernan to an obsession with litter and the need to clean up Australia.

He will roll up his sleeves along with half-a-million volunteers in more than 850 cities and towns across Australia and they will collect about 10,000 tonnes of rubbish from our waterways, parklands and roadsides.

This is the eighth time it has been held, yet the event’s chairman and founder knows he is fighting a losing battle.

Cleaning up is one thing. Stopping people littering is another.

On a recent visit to Melbourne, Kiernan, about to turn 57, leapt at the opportunity to play a quick nine holes.

Pulling a full set of Dynacast metal woods and irons provided by the Albert Park pro shop, he wore cream-coloured trousers, a striped shirt and, despite the blazing sun, went hatless.

A sailor’s hat would have completed the picture.

“The golf course is a great social place,” he said.

“But I use my boat as you use the golf course. Just to go out and have a sail, have a chat. It breaks down a lot of those formal barriers.”

Kiernan adores yachting and his boat is his passion.

He spoke fondly of his second wife, Judy, and the daughters from his first marriage, Sally, 27, and Pip, 26, but he gave the impression Maris is his real love.

She is a duel-mastered, 11-metre Tasman seabird, built in 1958 from huon pine.

“I’ve sailed her to the United States twice, alone and with a crew of six,” he said. “I’ve crossed the Tasman 13 times. Been to Hobart five times. I did 36 Pacific islands in one year. She knows her way around!”

Kiernan has represented Australia in the Admiral’s Cup, the Southern Cross Cup and the Trans Pacific series.

Ten years ago he fulfilled a dream by finishing the BOC Challenge solo around-the-world race in sixth place in an international fleet of 25.

“Sailing alone you just get the most incredible feeling of freedom,” he said. “I love the freedom of getting in that boat and going… anywhere.”

He told me his Scottish mother lived in Middle Park and that his father, both in Victoria, worked for G.J. Coles and eventually became manager of the London office.

Kiernan was born near the shores of Sydney Harbour in 1940 and grew up learning to swim, fish and sail on his favourite waterway.

Was his father a yachtsman?

And I’d that rub off on to him?

“Well, I was a long-time member ta Royal Sydney,” he said.

Then came this loud, throaty laugh.

Now Kiernan plays only two or three times a year. And it showed. His club selection was ordinary.

“What do you think, a five-iron here?” He said, when it seemed a nine might fit the bill.

His swing was rusty and he did not mind cursing his crook shots.

“Oh, you rotten mongrel,” he said, as another tee shot scuttled along the ground.

He explained how the seeds of Clean Up Australia Day were sown during his BOC race.

“I loved Sir Francis Chichester and all his deeds,” he aid.

“I’d read about the Sargasso Sea south of Bermuda. It held a great fascination for me. It was supposed to be the place where the halcyon bird charmed the sea to clam and laid its eggs on the seaweed.

“But when I sailed in, all I saw was floating rubbish. Plastic bags, toothpick tubes, thongs, broken plastic buckets, all this crap!

“I was bloody furious. As soon as I got home I started Clean Up Sydney Harbour.”

The following year it became Clean Up Australia and then, in 1993, using Kiernan’s blueprint, the United Nations held Clean Up The World. Thirty million people in 100 cities took part across the globe.

“Now we’ve got 20 people working for us,” Kiernan said.

“We’re not funded by governments, we raise our money from the corporate sector.

“Funny thing is, people think I’m wealthy. But I don’t make any money out of this. You get strung up in Australia for that!”

“You are extremely decorated,” I said.

“Yeah, like an Argentinian general,” he bellowed, again with a booming laugh.

“Nah, look, it’s a great honour and I’m very proud for be Australian, but it means more to me that that. It gives me clout and I use it to achieve my goals.

“I was Australian of the Year because of Clean Up Australia. It was an award for all the people who support it.”

He practices what he preaches. I am sure he would have played better had he concentrated on the golf instead of garbage.

A drink can, a plastic bag, pieces of paper, a cigarette pack, a bottle, a plastic six-pack holder – he found them all.

Despite a 23-over score of 56, he had literally cleaned up over Albert Park’s front nine.

As we said our goodbyes he darted off, mid-sentence, to a plastic bottle left on a seat, right beside a rubbish tin.

“Now you think they’d at least have a bloody pot shot at the bin, wouldn’t you?” he said.

“Despondency is our biggest problem. I’m too much of an optimist for that. I know that Clean Up is not the answer to the problem. But as long as we help people to feel like they’re making a difference, that’s important.”

How long can he keep doing this?

“As far as I’m concerned, this is my job for the rest of my life,” he said. “I’ll just keep going until I’m not needed anymore.”