Posted at 03:05h in TEE FOR TWO by PeterMitchellMedia 0 Comments
0 Likes 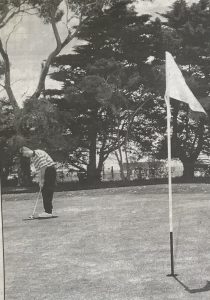 Former Coodabeen Champion Ian Cover has risen to the Premier’s challenge and is enjoying his new political role so much he is shouting it from the rooftops.

See if you are up for this. Geelong has lost the 1995 AFL grand final… flogged by 61 points.

Your job is to grab a microphone and interview the shattered players as they disembark from the team bus in front of tens of thousands of distraught fans outside the Geelong Town Hall.

You would prefer an easier one? Well, try this… see if you can name the politician who represents you in the Upper House of the Victorian parliament?

If you have come up with the answer, odds are you live in Geelong. And pretty much everyone in Geelong knows Ian Cover. And at the last state election, he won the Upper House seat of Geelong Province. After years of keeping his own political counsel, he can shout it from the rooftops; he is one of Jeff Kennett’s Liberals and proud of it.

And when he agreed to take part in a round of golf, he did not hesitate to nominate the Geelong Golf Club. He is a member. “And it’s in my electorate.”

He plays off the maximum club handicap of 27.

”When you say to people you’re off 27, they either think you can not play, or you’re a cheat,” Cover said.

“How often do you play?”

”I put the clubs away during winter. I can not understand people who get all decked out in their wet weather gear and play in the rain,” Cover said.

“And after the footy finishes, that’s about the time to get the clubs out again. But at the moment I’m playing about once a week, which is great. Ideally, I’d like to play 18 holes once a week and another nine just to keep in tune.”

Cover took a metal 3-wood off the first tee and cracked it sweetly down the middle of a generous open fairway.

The putter was his big problem early. For someone off 27 he found the green regularly with a not quite text-book swing, but his blade let him down with three-putts at the first four holes.

“As a Geelong man, have you ever played golf with Gary Ablett?”

”No. He plays down at Torquay. Hits it well too, apparently. But he does everything well,” Cover said.

Geelong is a golf club with an illustrious history. It was founded in 1892 and is the oldest original 18-hole golf club in Australia.

Born in Melbourne, Cover moved to Geelong with his family in October 1963. His father was a salesman with a housing company. As it was the home of the reigning premiers, an impressionable seven-year-old naturally started barracking for the Cats.

With three brothers and a sister, all older than him, Cover attended Belmont High School then studied arts at Geelong’s Gordon Institute of Technology, but tossed in the course when he obtained a Cadetship with the Geelong Advertiser.

A job writing showbiz for TV Scene took him to Melbourne in 1979, and a year later, dabbling in public radio, he was a member of the Coodabeen Champions.

“I first got absolutely hooked on radio when I was at home sick from school years ago and I remember listening to Noel Ferrier and Mary Hardy. I thought they were absolutely fantastic.”

With and without the Coodabeens, Cover has worked at Triple-R, 3UZ, 3LO and 3AW and can quickly rattle off the names of those who have influenced his work.

“I really admire Bert Newton,” he said. “I’m an unashamed ‘Bert-ophile’. John Blackman and Uncle Roy, when they were really big-time. I’m a Paul Barber fan. A lot of people aren’t, but he did some terrific radio. And I love Martin and Molloy, they’re funny.”

At the par-four 13th, from a difficult lie beneath a tree, he almost whiffed the ball. It scuttled along the ground and came to rest in the middle of a neatly rolled pile of irrigation hose.

”Now you know why I’m off 27,” he said with a laugh across the fairway. Then he frowned, swallowed his medicine and counted all the shots.

“Definitely no cheat,” I thought.

I asked him about his new career. What made him want to enter politics?

”I’ve always been a party supporter and it’s a pretty powerful argument when the Premier says to you, ‘Why don’t you have a go?’ I would see him all the time at functions I’d be hosting and he kept saying to me, ‘Come on, what about Geelong? When are you going to have a go?’ And I kept saying, ‘Oh no, I think Burwood’s my go’.”

Eventually, he could resist no longer.

“I started to entertain the thought a little more after 1992, seeing the Kennett Goverment come in and turn the place around,” Cover said.

He chose the electorate that takes in the four lower house seats of Geelong, North Geelong, South Barwon, and Bellarine. From Little River, right down beyond the Bellarine Peninsula to Anglesea, and to the north as far as Anakie; that’s his patch.

On March 30, last year, Cover won with 54 per cent of the vote, and as only half the Upper House is dissolved at each state election, he has at least eight years in the job.

“Has politics been harder than you thought it would be?”

”No. I didn’t have any expectations at all,” Cover said.

“I was just prepared to have a go. Hard jobs to me have always been physical jobs and I’ve only ever had talking or writing jobs. It’s been a steep learning curve, one that goes straight up. But then again, I didn’t know anything about radio until I first went into a studio and found out how it all works.”

He seemed such a determined character, despite his happy-go-lucky exterior. After his fourth double-bogey on the trot, he set his sights on a par.

“Some people might think it isn’t good to have a Coodabeen with a background of a whacky, zany, funster show, going into politics,” Cover said. “Like I can’t be taken seriously.”

At the short 17th, a par three of 145 metres, Cover hit an 8-iron that floated delightfully to the back of the green. “Yeah, happy with that one,” he said.

Two putts later he had his par.

He was enjoying himself and said it was a pity we couldn’t go on for more holes. His wife, Lydia, was due to join him in a search for a block of land. The Covers plan to settle in Ian’s electorate this year.

He and Lydia have two daughters, Coco, 5, and Olympia, who was born three days after last year’s State election. Coco sees Mr Kennett on television and knows it’s her Dad’s boss, but she gets a little confused.

“I mentioned this to one of my colleagues at Parliament House,” Cover said. “That my daughter thinks Jeff is the Prime Minister and my colleague said, ‘That’s right, so does he!’”

With a bogey at the last, Cover had broken 50 for the back nine and played one stroke below his handicap.That par at 17 had made all the difference.

As we said our goodbyes, I suggested things might be a little different at the footy from now on. With his political profile increasing by the month, his constituents might be willing to bail up their member at Kardinia Park.

“No… remember in Geelong, the footy comes first. It’s a different story at Parliament House. People are always bailing me up there and saying, ‘What’s happening with Gary Ablett?’”