Posted at 02:01h in TEE FOR TWO by PeterMitchellMedia 0 Comments
4 Likes 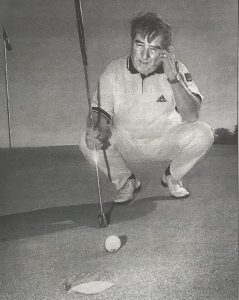 Back on top of the ratings with 3AW, Ernie Sigley’s passion for people and everyday trivia has been winning the hearts of audiences for more than 30 years.

He has been a member of the magnificent Victoria Golf Club in Cheltenham for 23 years, but Ernie Sigley’s visits have become rare.

After he finished a recent shift at 3AW he took me over the club’s front nine. It was the first time Sigley had been there in more than three years.

”I’m not into competitions or anything like that,” he said. “I go out and have fun. I know I’m never going to be any good. I just reckon it’s a good game played by good people.”

He changed into a white shirt, cream-coloured trousers and white golf shoes.

On the first tee – a short, sublime par-four, made all the more difficult by marvellous bunkering – Sigley seemed slightly embarrassed. Members were giving him a hard time for staying away so long.

“Yeah, I know… it’s been a while,” he said to yet another well-wisher.

His opening shot remained close to the ground, but ran on, and on, along the dry fairway.

Then came a marvellous chip that was all touch, followed by a three-metre putt that dived into the cup for a birdie three. He let out a loud yelp.

Welcome back to Victoria, Ernie!

As we headed down the second, he marvelled at the state of the course.

“Bee-yoot-iful. Geez, I wish mine was like this!” Sigley said.

Sigley has his own golf course, on the 5.6ha family farm at Buninyong, on the mountain overlooking Ballarat.

“The place came with half a dozen cattle, but I didn’t see much point in keeping them,” he said. “So I cut the grass, and put nine greens in.”

”We’ve got 800 roses as well,” he said. “It’s a pretty spot. It doesn’t much matter how you play. There’s never anyone behind you!”

He plans to toughen it up by adding bunkers and a few more trees.

“But I don’t play it that much,” he said. “If I’m there, I’ll end up working on it. I love doing that. Basically, I’m a frustrated curator.”

His course has become his “field of dreams”. He built it and he is expecting people to come.

“We’re running it as exclusive accommodation,” he said. “One or two couples for the weekend. We give ‘em breakfast, then there’s plenty to see. And they get their own golf course! I’d love to end up doing the radio and running my little resort.”

His laidback manner is deceiving.

The younger three are all doing tertiary courses, while Matt has a band called the Earthmen, which has released its first single.

Along with his remarkably successful return to radio, taking 3AW’s afternoon slot to No.1 for the first time in the station’s history, Sigley has started holding dance nights at the Hawthorn Town Hall.

“It’s for people my age who have nowhere to go,” he said.

“I sing all night with a band, get a licence, sell grog, give away prizes. Barn dancing, swing and rock, we do it all. Four hundred people turned up last time.”

Sigley’s round was no progressing well. He thought had caused a car accident at the par-four fifth by driving out of bounds.

“Didn’t you hear the screeching tyres?” He said, wincing.

He was relieved when I found his ball under a tree.

Sigley first started playing golf when he moved to Adelaide in 1963 and ended up hosting Adelaide Tonight on Channel Nine.

He became a member of the Mount Lofty Golf Club.

Ten years later, following the resignation of Graham Kennedy, Sigley was back in Melbourne as host of his own national tonight show.

Keen to continue his affair with golf, Sigley joined the Victoria, but only after club officials interrogated his proposer.

“He was a doctor,” Sigley said, “and he said to the committee: ‘I was the first person to meet Ernie… I brought him into the world,’ and one of them said: ‘So you’re to blame!’”

Sigley used a rare set of early Ping clubs that he had picked up in his Adelaide days.  They appeared to offer little help.

After his birdie beginning, he hit a few solid and straight drives, but the rest of his game needed attention and several times, especially in greenside bunkers, he simply picked up his ball, and muttered: “I’m out.”

But with never a hint of anger or malice.

“This is lovely,” Sigley said, as we stood on the next tee.

”I’ve got to start to use this place more often.”

I raised the topic of radio, and Sigley’s eyes lit up.

His first job was as a 14-year-old panel operator at 3DB in 1953, and he clearly adores the medium.

“I like people,” he said. “I like talking to people. I like to listen to them when they talk, which, I think, is the art of interviewing. A lot of people have questions written down. I don’t. I just listen.”

His producers would testify to his minimal research, yet listeners are often surprised at the depth of Sigley’s general knowledge and his passion for trivia.

“I pride myself on my knowledge of diverse subjects,” he said. “I am self-taught. I left school at the age of 14 to help my folks. But I love reading. I’ve got hundreds and hundreds of books. And I’ve got a photographic memory.”

His show crosses the current affairs border only when it has to and, mostly, it revolves around Sigley’s personality.

“I don’t think I’m anything special. 3AW is such a good, strong station. If I’d gone somewhere else I don’t think I would have got to No. 1,” he said.

His golf still had not improved and Sigley showed zero interest in the score, but he seemed to be having a ball.

We chatted about Channel Nine’s incredibly successful program, The Footy Show. I had heard it was originally Sigley’s idea.

“Yep. I was doing it every Friday morning on my show (with Denise Drysdale). I put Sam Newman on it, but Nine told me to get him off because he was no bloody good!” he said.

”So I put Dermie (Dermott Brereton) on. A couple of years later, after talking to Dermie, I said to Nine that we can do a footy show on a Thursday night at 9.30, using Derm, Sam and Doug Hawkins. They said: ‘Nuh. Wouldn’t work.’ They started it not long after that.”

What does he think of the program now?

“Never, ever. And I never will. I’d throw a brick at the TV! No point in worrying about it though, that’s it.”

As we walked into Victoria’s magnificent clubhouse for a couple of convivial, I wondered whether Sigley still harboured thoughts on a return to television.