Posted at 01:31h in TEE FOR TWO by PeterMitchellMedia 0 Comments
0 Likes 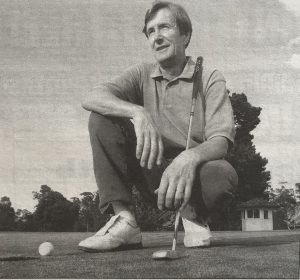 TV presenter Paul Barry outlines some of his views on current affairs television.

Paul Barry admits it was the moment that put him on the television map. Alan Bond, facing fraud charges and pleading memory failure, is walking along the footpath outside Sydney’s Federal Court.

Suddenly, Barry and camera crew approach the failed entrepreneur from the rear. The reporter behind an earlier Bond expose on Four Corners, Barry jogs up beside Bond, introduces himself and hands over his business card.

Bond grabs the card, glares at it, throws it to the bitumen and stomps on it like it was on fire.

”So you do remember me?” says Barry.

”Time seemed to stop as he took my card,” Barry said on a recent visit to Melbourne. “I thought: ‘God, this is fantastic! Why is he doing this? Oh, this is wonderful! It was an incredible moment. I knew he’d remember me.”

Barry laughed as he described this. But, as I discovered, he enjoys a laugh.

The new host of Channel Seven’s Witness wearing green canvas trousers and olive green shirt, was keen to join me as a guest at Huntingdale, home of the Australian Masters.

I wondered if he felt any sympathy towards Alan Bond.

“No… he deserves it. He stole an awful lot of money. I think it’s important for Australia that he was convicted and jailed.”

We started at the 10th tee and Barry took a deep breath as he looked at the dew-covered fairways.

“This looks absolutely beautiful,” he said. “But I’ve only played twice in the last year.”

Born and raised in Kent, England, it was his first taste of Melbourne’s famous sandbelt. With a swing as smooth as velvet, he belted a long, opening drive that tailed off into the right rough.

Then he disclosed his golfing pedigree. In the late 1960s, while studying politics, philosophy and economics, Barry was captain of Oxford University’s golf team, playing off a two handicap.

“It was a ridiculous privilege. I did very little work. I played an awful lot of golf. We had 24 weeks of study and 28 of holidays.”

Along with tackling Cambridge in the annual grudge match, Barry would travel across Britain on weekends to represent Oxford in club matches.

“Even then I realised that it was the time of my life. It was fantastic. These clubs would put us up, entertain us, feed us, ply us with drinks… then beat the crap out of us.”

He studied enough “when exams were in the air” to obtain his degree, but had no occupation in mind. With a vague interest in politics, he became adviser to a government minister, then tossed it in after a year.

“I didn’t enjoy it. I wasn’t very good at it. So I went to the States for a year. When I came back, I got into journalism. It helped that my brother-in-law worked for The Financial Times.”

After various magazine and newspaper jobs, Barry moved into TV with financial and current affairs programs with the BBC. Then, in late 1987, he moved to Australia with his wife and three children and started a seven-year stint with Four Corners. “I thought it was time for a change. The prospects looked good in Australia at that time.”

After a bogey, double-bogey start, Barry – using a full set of “Tommy Armour” irons and “Taylor-made” metal woods – played some wonderful tee-to-green golf, but was baffled by Huntingdale’s tricky greens.

Yet, he seemed right at home, whistling as he walked. He mentioned he was once a member of the Balgowlah Golf Club in Sydney.

“I wanted to get back to playing decent golf. I found that I could play to five (handicap) reasonably easily… and then I started windsurfing again.”

Unlike some men in their late 40s, Barry prefers the thrill of holding a sailboard to holing a sand wedge.

“My job is pretty stressful and golf, at the level I try to play it, is a bit too much like work. Blasting across the harbour at 30 knots and hanging on for dear life, knowing that just one mistake has you flying through the air… that clears the mind a lot more effectively than a game of golf.”

We came to the long 14th and Barry again finished with a creditable bogey after finding the sand twice. “God! Another hole without a par,” he said.

We spoke about his family. Barry’s wife, Jane Wheatley, is a journalist with HQ magazine and they have three children – Amy, 18, Alex, 15, and Josh, 13.

”Alex is interested in skateboarding and nothing else… maybe Nirvana. Josh is into rowing and rugby and he’s a big ‘fella’. Amy is finishing school and has a place, strangely enough at Oxford – provided she gets the right exam results.”

I wondered about his career at Four Corners. Why did he leave?

He said that after years of reporting, he had been promised the plum role of presenter. “That taught me that promises mean nothing in television. I was upset that they gave it to someone else (Liz Jackson), and I did depart. But, again, I was looking for a change.”

Now Barry is finally a prime-time current affairs presenter – but only after a year of remarkable internal brawling at Witness that ended in Jana Wendt’s much-publicised legal battle with the Seven Network.

So what can we expect?

“First and foremost, we’ve got to keep the quality coming. That’s the challenge. You have this weekly monster that needs to be fed and it becomes very hard. We invested a lot of stuff early in the year – not in monetary terms, but in talking to people, arranging, setting things up. Things that might work later in the year.”

Barry came home with a wet sail, just missing birdie putts at 17 and 18 for an eight-over 44.

I asked him how Australian current affairs TV compared with Britain. “There is a marked difference, and probably, the gap is growing wider. In Britain, there’s much less chasing individuals who make the news and throwing money at them. In Australia, I don’t think it’s as good as it ought to be. There is a genuine need for a program like Witness, as long as it delivers what it has promised to do.”