Posted at 01:49h in TEE FOR TWO by PeterMitchellMedia 0 Comments
0 Likes 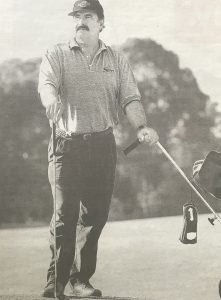 Leigh Matthews has been involved with football since he was 12 and, apart from the “Neville Bruns incident”, has never regretted a moment of it.

Last year, for the first time since he was 12, Leigh Matthews was not involved as a player or coach at a football club.

“It was great… refreshing,” he said, as we tackled the back nine at the Woodlands Golf Club in Mordialloc. “I found myself having a busy winter without having to worry about winning or losing.”

Still solid and stocky, Matthews wore navy trousers, a white Sport 927 shirt and swapped his street shoes for brown spikes which he pulled from his golf bag.

This year he will again have a busy winter as a football analyst and commentator, but many people think Matthews, 44, is simply marking time before he has to worry about winning or losing again.

”I haven’t ruled out coaching. But someone would have to come to me and say, ‘Listen, we’re interested in you.’”

As we stood on the 10th tee, a tough par four of 400m, I was surprised that Matthews was left-handed. “Yeah, I know, it’s strange. It’s to do with the left and right sides of my brain. I’m a bit skew-whiff. I’m a right-handed person, but all double-handed sport I play left-handed. I play cricket left-handed and tennis left-handed.”

He said he had played Woodlands before. It is a worthy member of Melbourne’s world-famous sandbelts. Matthews found the trees with a hooked drive and started with a double bogey.

There was a time when he was quite serious about golf. In the 1970s he joined the Southern Golf Club and when he bought a sports store at Brandon Park shouted himself a set of Jack Nicklaus Mark IV clubs he was still using.

He even had a few lessons from Bob Shearer’s coach, Harold Knights. “But then I let my membership slip. I found myself going to the races during the summer. Golf just wasn’t a priority. But in the past few years I’ve got the clubs out again.”

Matthews grew up on farmland at Langwarrin and learnt to play golf on the Frankston public course, now the city’s botanic gardens.

“But I always wanted to play football and play it at its highest level. I never had a time when I didn’t want to do that.”

Paddocks were his playground as he dived around in his North Melbourne jumper with number 17 on his back. Allen Ablett, the North Melbourne great who became VFL president was his hero.

“Strange, really, because the whole family barracked for Essendon. But I took a shine to North, I think because Langwarrin wore their colours.”

He holed a three-metre putt for bogey at the 12th and told me his father worked for the PMG (now Australia Post). When Matthews was 10, the family moved further up the bay to Chelsea. His football career took off. He became captain of Chelsea under 15s, then jumped an age group – moving straight into the seniors the following year.

Chelsea won the premiership and Matthews was the competition’s leading goal-kicker. Zoned to Hawthorn, he made his debut at 17. Within three years he had played in the VFL premiership, won the club’s best and fairest and represented Victoria.

He became one of the game’s greats – and one of its toughest, never winning any popularity polls with opposition supporters.

The Cat rover suffered a broken jaw in an off-the-ball incident during a spiteful match at Princes Park in 1985.

Matthews appeared in the magistrate’s court.

He didn’t bristle when I asked if it was his biggest regret. “Oh yeah. As soon as it happened I immediately regretted it. But… you just have to live through it.”

I asked him had he ever spoken to Bruns about it? “I’ve seen him here and there, but I’ve never discussed it and don’t intend to – there’s no need.”

He was loath to talk about his private life. He did say he was married at an early age and has two daughters in their mid-20s, Tracey and Fiona, both of whom live in Melbourne. “But the personal stuff is personal,” he said, staring straight ahead.

He belted a long drive down the 15th that sliced back into the middle of the fairway. With a wristy swing he sliced most of his shots, and always allowed for it.

His major downfall was the sand. He took four shots in one bunker and his eyes glazed over, developing a frightening stare. It was a look many former VFL players would know too well.

“Now I remember why I gave up this bloody game,” he snarled.

We spoke about how he etched his name in coaching history in 1990 by ending Collingwood’s 32-year premiership drought in a torrent of euphoria. He has not heard anything official from Victoria Park since his departure in 1995.

There have been no invitations to speak publicly, present guerseys or even draw the raffle. “It’s not that we’re on bad terms or anything,” he said. “I’m sure they just wouldn’t have even thought of it.”

As a Magpie fan, I wondered about the club’s lack of success since the premiership, particularly the dismal title defence in 1991. “Well, we weren’t that good in the first place. That was a soft year to win a premiership. We were up there all year, but not by far the best team. A lot of things that had gone against Collingwood for 30 years went with them that year.”

Then he pinned the blame fairly and squarely on the celebrations. “A team wins a premiership every year, but that year it was made out to be a bigger achievement, simply because Collingwood hadn’t won one for a long time. I played in four premierships with Hawthorn. None of them were treated, feted and reacted to like that Collingwood one was.”

He even considered re-signing because he saw it as mission impossible.

“The supporters never wanted the celebrations to end, so you were fighting the world, really.”

On June 21 this year, Matthews will coach again. Victoria will play South Australia at Football Park and he drools at the thought of helping select, then mould, a team of champions.

Allowing a generous seven for the hole at which he came to grief and picked up, his score would have been 55. He never said so, but I had the impression he found his game unsatisfactory.

I wondered if the coaching job at Hawthorn was something he coveted? “No. I think Ken Judge is doing a great job. I can’t say I harbor any deep-down desire to coach Hawthorn. But I do care about the survival of the club.”

For the moment Matthews is happy with his media commitments, including a new television role joining Bruce McAvaney and Mike Sheahan on Channel Seven’s Talking Footy, which returns tomorrow night.

“I pinch myself most of the time,” he says of his media life. “Here I am, getting well paid for going to the footy. I must admit I love watching the game, just as much as I used to love playing.”