Posted at 23:16h in TEE FOR TWO by PeterMitchellMedia 0 Comments
0 Likes 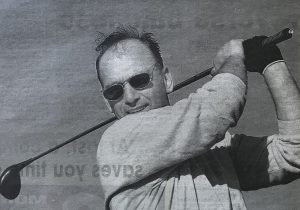 He speaks of the zen of the game and will tell you golf is a science. There are better players than Joe Camilleri but few who talk about golf with such feeling.

One of the things Joe Camilleri loves about golf is the fresh air.

“In the music business you spend a lot of time in smoky environments,” he said, standing on the first tee at Elsternwick’s nine-hole public course. “That’s why it’s just great to get out here.”

There are better players than Camilleri, but few who talk about golf with such feeling. He sees golf as a science, and speaks about the zen of the game. “I’ve found that you can sort of meditate. You’re walking around for three or four hours. If you’ve got a few problems, you have a good chance of solving them,” he said.

He was wearing a loose-fitting lemon jumper over a black t-shirt, pin-striped suit trousers and thin leather loafers. His bag of clubs was slug over one shoulder.

“I didn’t bring my golf shoes. OK if I play in these?” he said, pointing to his slippers.

I had never seen anyone play in slippers before, but the ground was dry and firm.

As I discovered, Joe Camilleri is different.

After a long iron gently stroked down the first fairway, he ended the hole by missing a metre putt for his par-four. Standing on the second tee, he said, with a stern look: “I should have made that putt.”

He has built a more-than-respectable empire, not only from his success as frontman for the Black Sorrows. In his 25 years in music he has learnt all the tricks of the trade. Along with singing, playing the guitar and running a band, he has vast experience in all facets of touring, producing and publishing. He has built his own recording studio, and has a new record label for the Sorrows, and another for promising jazz artists.

He also runs the Beach House cafe at Elwood, which he co-owns with fellow musician Paul Hester. In an industry famous for its stereotypes, Camilleri has never stood still long enough to be pigeonholed.

During our round, he expressed heartfelt thoughts on a wide range of topics. “Take Greg Norman. I feel sorry for him. He’s the best player in the world, fantastic to watch, and people want him to win every time they see him. I can understand why that’s devastating,” he said.

Camilleri first came under golf’s spell in the late 1970s while touring with his band, Jo Jo Zep & the Falcons.

In Canberra, band member Wilbur Wilde suggested he have a hit, and Camilleri “got into the idea”. He did not start playing regularly until he bought himself a set of Pro-Simmon Charger clubs in the mid ’80s. “Then I’d be playing here and at Albert Park all the time. I’d be up there in winter at the crack of dawn,” he said.

He is proud of the fact that he has never had a golf lesson. “I’m a very good learner. I can learn… and then adapt things… and then make things up.”

At the par-three fourth, Camilleri skulled a chip shot that ran along the ground and stopped right beside the cup. “Man, I’m sorry about that,” he said. “But I’m taking it!” He had his first par and was warming to the task.

Camilleri has been married to Mishy (Michelle) for 20 years. They have three children, Natalie, 19, Harlan, 10, and Isabella, 2.

“Belle goes to Nat’s apartment once a week and stays over. Harlan loves cricket, basketball and soccer – he’s a great sportsman. There’s quite a gap between them all, but they’re great. The only downside is that you need to have your blood changed in Switzerland every two or three months. It tires you out!”

Born in Malta in 1948, the fourth of 10 children, Camilleri migrated to Melbourne with his parents when he was two. “We lived in Carlton, Fitzroy, then Port Melbourne. My parents now live in North Altona,” he said.

He grew up watching his dad earn a living from a variety of jobs. “My father was a spray painter, a carpenter, a builder, a baker. I learnt a lot from him,” he said.

Joe left school at 12, and worked as a cleaner and later as a gear-cutter. “I also worked in a flour mill, the car industry, even in a slaughter-house. They were all dead-end jobs,” he said.

Music represented a way out. His mother’s love of radio meant he had a musical grounding. “She was a great fan. I’d hear Ray Charles, Frankie Laine. I got introduced to that,” he said.

His first band was the King Bees. “We were all wogs,” he said, laughing.

What about Australian influences? “I go back to the days of Normie Rowe, Bobbie and Laurie. Max Merritt I got into. I was absolutely hooked by Spectrum, even though it wasn’t music that I ended up wanting to do,” he said.

He says he leads a privileged life. “I’ve been lucky… mostly able to pick and choose what I need to do. There’s a lot of people who have had to do cover bands,” he said.

On a few holes his chipping was most impressive. At the par-three eighth, he almost holed his tee shot, but it skipped over the back and he had to settle for a bogey.

He plans to relaunch the Black Sorrows as an eight-piece, jazz-funk line-up. A single, New Craze, is the band’s first new material in almost three years.

This is hot on the heels of the brilliant triple-live CD package, Radio Waves. “That was me paying homage to the Sorrows. It took me a year to put that together. That came out of 100 different shows over 13 years. I tried to represent everybody who had ever played with us,” he said.

Despite his loafers and a seven at the last, he finished with 43 for the par-31 layout. “Yeah, not real good. I’ve shot 37 here before. That’s my best,” he said.

We shook hands and I wished him well with his new single.

“It doesn’t matter if I don’t ring the bell any more,” he said. “You should never do things just for the sake of making money.”

So, what about the future?

“Well, I’ve got two or three albums to produce, then I’m going to concentrate on the Black Sorrows and my career as an artist. A friend said to me recently: ‘You need to go out and play again. Go out and have fun. That’s when you’re smiling.'”