Posted at 00:53h in TEE FOR TWO by PeterMitchellMedia 0 Comments
0 Likes 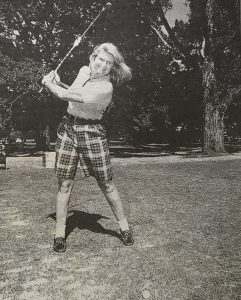 Atlanta Games hero Gillian Rolton is hooked on the lure of completing a hat-trick of Olympic gold medals in Sydney.

Gillian Rolton is as tough as the soles of her riding boots. She proved it at the Atlanta Olympics.

Despite a snapped collarbone and two broken ribs from a fall during the cross-country section of the equestrian three-day event, she climbed aboard and raced on. Then at the water hurdle she was catapulted from her mount, Peppermint Grove, and landed on her back.

And then we all watched her climb back on to her horse, holding the reins in one hand.

There were 15 jumps left and every time she landed the pain was excruciating.

Amazingly, she completed the course and etched her name into Olympic folklore.

I wondered how she would fare at golf.

”I’ll have a crack at anything,” she said, joining me on the back nine at Albert Park.

She told me she went to school with international golfing star Jane Crafter.

With an Albert Park buggy and a scratch set of my mother-in-law’s clubs, Rolton clutched her necklace carrying a golden pendant of a jumping horse.

“That’s my little medal from Greg. He bought it for me after we won in Atlanta.”

Greg is a school teacher in Adelaide. He and Gillian have been married for 11 years.

Rolton started her round with an airswing. “I guess I’m not allowed to swear,” she said.

Rolton told me she was once a “surfie chick” and did the “big trip” with a girlfriend along the coast from Adelaide to Sydney stopping along the way at each famous beach.

“Bell Beach, Lorne, Torquay, all that,” she said. “Back in the days when surfie chicks didn’t surf, they just hung around. I wasn’t into hanging around. I wanted to have a go at it.”

She did not seem to be suffering any lasting effects from her Atlanta injuries.

“Well, I still can’t sleep on my left side – my collarbone has a big lump on it,” she said.

Rolton was born in 1956, the year of the Melbourne Olympics.

She has always lived in the foothills south of Adelaide and, as far back as she can remember, always wanted a horse.

“I tried running, ballet, gymnastics, piano. I was useless at all of them, but I was always thinking about a horse. Then my parents, who are totally non-horsey, finally gave in to my pestering. He was black and his name was Randy. Short for Randolph. I was 10,” she said.

I inquired about the big grey horse that she rode in Barcelona and Atlanta – Peppermint Grove.

He is 15 years old now and Rolton has had him since he was four.

”Will you be competing with him in November?”

”No, he’s getting on a bit now,” she said. “He lives at our place. He’s got a nice paddock and a nice stable and Fred pretty much does what he wants.”

”After that first fall, I had busted bones, but he only had gravel rash. When we got to that water fence, my left arm wouldn’t work, so we were hopelesssly out of position. Any other horse would have stopped and said, ‘Nup… bugger you, I’m not going to jump’. But dear old Fred, he’s such a wonderful horse, he said ‘I know what I have to do I have to get over this fence with or without you’. He jumped and sent me swimming. He’s one of only two horses in the world that have won back-to-back Olympic gold medals in the three-day event.”

I felt that Rolton’s golf would have been better had Fred been walking with us.

“You and Fred must have an extraordinary relationship.”

”That’s what I love – the fact we are able to communicate,” she said. “Sure, it’s not a words thing, it’s feel and intuition.”

Now there is the lure of a third Olympic gold medal.

”I want to go for a hat-trick in Sydney – that would be fantastic.”

Rolton has given herself two years.

Her golf was giving her a workout, too. At the par-five 15th she chipped from one side of the green to the other, then back to the spot she’d started from. For the second time in three holes, she’d scored an 11.

She was desperate for a par. Her chance came at the final hole, a par-three of just 135 metres.

Rolton’s tee shot was her best for the day, just 10 metres shy of the green” “Now, why couldn’t I have done that earlier!”

We found her ball snug in the middle of a scattered pile of pine cones and twigs.

“You can move them all out of the way, but don’t move your ball.”

When I next looked back she had cleared the ground. There was not a twig or a pine cone in the two metre radius from the ball. It was most impressive.

But from there, the dual Olympic gold medallist shanked her chip into the green side bunker.

“I don’t like this club,” she said, as she help my mother-in-law’s pitching wedge by the throat. There was no mistaking her meaning.

She had played the back nine in 63 and he final attempt at a par had ended in a triple bogey.

I reassured her that 28 over par for one’s first outing in more than 20 years was a respectable day’s work. It seemed to fall on deaf ears. We went back to talking about horses.