Posted at 01:04h in TEE FOR TWO by PeterMitchellMedia 0 Comments
0 Likes 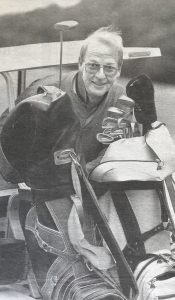 Media identity John Blackman, shed of his footy mission, has hit the fairways with a vengeance. He packs a power of thought and humour – with a fair shot or two – into a round at Cape Schanck.

Strangely enough, John Blackman’s bid to become a single-figure handicap golfer has been helped by the AFL.

“I just can not bring myself to imagine that Brisbane is anything like Fitzroy,” he said as we set off on our adventure over the National’s spectacular course at Cape Schanck.

“I flew over to Fremantle (for the last match) and I thought I’d be a big, brave boy and wouldn’t cry, but as soon as they started singing Auld Lang Syne I just went to pieces! I don’t ever want to go through that emotional trauma again.”

The AFL is now of minor interest.

“I already miss the camaraderie, the companionship, the club spirit. But now I concentrate on my golf. It’s a wonderful game,” he said.

Blackman’s major goal is to obtain a nine handicap by July 14, his 50th birthday.

He currently plays off 15. We took a motorised cart, but Blackman walked to his ball with a limp.

It had nothing to do with a “dickie” knee.

”Actually, it’s osteo-arthritis,” he said with a chuckle. “I’ve got it in both big toes. It’s not too bad at the moment.”

Though the National is an hour’s drive from his Toorak home, he has been a member for three years and tries to play there once a week.

With its tiered fairways, brutal tea-tree rough and vast, roller-coaster greens, he has heard the critics call it a “tricked-up” layout.

His black cap bore the logo of his home course and his local knowledge was impressive, especially on the greens.

”If you’re in two minds about the line, just remember, all putts break towards the sea,” he said.

His action was ungainly, but he pointed out that it was a far cry from his early days.

“I used to have a swing that looked like a guy trying to kill a snake in a phone box!”

Using his Tommy Armour Silver-Scot clubs, he started with a double bogey, then played the next six holes in three-over.

Though he once worked weekends at the old Waverley private golf club as a teenager, it was not until 1990 that Blackman started playing seriously. Around that time he and Wilbur Wilde had been sacked from their radio show on 3UZ.

”Wilbur, God bless him, talked me into joining the Fairway Club, which is a social group that plays on different courses every Monday. I’ve been addicted ever since,” he said.

“Golf has been a lifesaver for me. It has helped fill in big gaps.”

In between playing shots and firing off one-liners, Blackman, at times philosophical and always articulate, made it clear he missed radio with a passion.

With Bruce Mansfield (Uncle Roy) on 3AW, he was No.1 on Melbourne breakfast radio from 1981-86. Then, amid much bitterness, he upped and left for 3AK.

”Everyone makes a rash decision in their life,” he said. “I think that was mine.” Blackman has not had a full-time job in radio since leaving 3UZ.

”Once you’ve lost that foothold, it’s very hard to get back in. I made the fatal error of letting go of my grasp,” he said.

We stood on the National’s 12th tee, with its breathtaking view along the coast to the Port Phillip heads.

“This has always been my nemesis,” he muttered, before taking a seven.

There is no doubt he has all the tools to reach that magical nine handicap. His major problem seemed to be length from the tee. “I’m never going to be a scratchmarker,” he confessed. “I just like to have a bit of fun.”

Many people think Blackman has one of the easiest jobs in television. All he has to do is sit in a little booth for two hours a week and try to make Daryl Somers crack up.

”I’m a comedy sniper, just waiting for my chance to go ‘bang’.”

Blackman’s arsenal has been crucial to the remarkable longevity of Hey! Hey! It’s Saturday.

”But I only get these five or 10-second windows of opportunity to ply my trade,” he said. “So, it better be good, it better be right, because there are no second chances. If there’s egg to be worn, you’re going to wear it.”

After 25 years, Blackman said he had yet to tire of his Saturday gig.

“It’s the one time of the week I sit down and actually have a good belly laugh,” he said.

How long can it go on?

”I thought last year was going to be it. If it goes on for another year, that would be terrific.”

Besides Hey! Hey! and golf, Blackman spends his time running his own television and radio production company, and hosts numerous corporate functions, conferences and awards nights, locally and interstate.

He mentioned that, personally, this year was a special one. His wife, Cecile, turned 50 last week, and later in the year the couple will celebrate their 25th wedding anniversary.

”We were married on December 2, 1972, which was the days Billy McMahon lost his election. I lost mine that night, too, but that’s another story!”

Blackman punched in a seven-iron to the hidden pin on top of the 15th green, and safely two-putted for his fifth par of the round.

He told me about his daughter, Tiffany, 22, who was born three months’ premature and totally blind.

“Two years ago she went off to London, all by herself, for five months. That just knocked me out. She’s incredibly independent. You look at other 22-year-olds and they bitch and complain about all sorts of things. She had a job with Myer before they went through downsizing and she would trot off to work each morning with her cane. I’d think ‘God, she’s got to get on a tram and cross busy intersections!’ Tiff is the bravest person I know, without a doubt.”

Under threatening skies and a brisk wind, our conversation returned to radio.

Blackman mentioned that he was glad to hear more talk on the FM stations. Who are his favourite personalities?

“Bruce (Mansfield) is still one of the funniest guys on radio. I remember my days with him with great affection. But there’s not many when you go across the dial. Peter Evans, on the ABC, was my last hero. John Laws was once, but he is wearing a bit thin. I’ve got a friend who sends me tapes of a bloke in New York called Don Imus. He’s an inspiration to me because he’s 55 and only just starting to hit his straps.”

On the 17th tee, a par-three of 152m, Blackman pulled off the shot of the day. Using his six-iron, he played his ball high and left, then it faded back towards the hole, pitched a few metres short and tickled the edge of the cup before finishing within “gimme” distance.

“Oh, you bloody ripper!” he chortled.

Does he seriously think he’ll make it to single figures by July 14?

”I can do it. It’s like anything in life, you can do it if you put your mind to it. I could have done it at least two years ago, but I was struck down by this tragic lack of ability. And I’ve been trying to recover from it ever since.”