Posted at 23:33h in TEE FOR TWO by PeterMitchellMedia 0 Comments
0 Likes 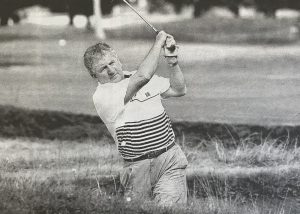 From playing piano in a Detroit winebar to Melbourne’s top civic job, Ivan Deveson has always had a necessary drive to break par.

Ivan Deveson was running late when he arrived at magnificent Kingston Heath course in his chauffeur-driven, white Holden Caprice, flying the City of Melbourne flag on the bonnet.

His driver assembled the Lord Mayor’s buggy and golf clubs while his boss sat in the car finishing a phone-call.

”Sorry about that,” he said. “There’s just so much going on at the moment.”

Deveson is a man of many parts. During a quick nine holes he told me he once had a job as a pianist in a Detroit winebar. “And my signature tune was Tea for Two… That’s the only reason I’m doing this!” He laughed loudly as he slapped me on the back.

“That’s where I learnt to understand people,” he said. “You learn a lot about them when you sit behind a piano that’s also a bar.”

For his day on the course he wore light brown, canvas trousers, a white shirt with blue stripes, white golf shoes and a blue NBC sports cap. It was the first time I had seen him without his trademark braces.

We started from the wide open spaces of Kingston Heath’s first tee, and the Lord Mayor took a three-wood and belted a short drive straight down the middle. A member at Huntingdale, off the maximum handicap of 27, he told me his ambition was to break 100 over his home course. He has yet to break 50 on either nine.

“I get close every now and then. I try to run out and get nine holes late on a Sunday afternoon. So far I’ve only been able to do it once every two or three months.”

Elected a little over a year ago, Deveson is a third of the way through his term of office. “They used to be one-year terms, but the local government reforms brought in three. I’m grateful for that because it takes you a year to get up to speed! It’s the hardest thing I’ve ever done, but definitely the most interesting.”

He played with a set of Chicago irons and, despite his opening shot, the matching woods stayed in his bag. “I haven’t managed the game well enough to use them regularly,” he said. Deveson first played golf at Chiltern, south of Wodonga. “I had a very dear friend when I was a little kid and he used to take me up there for my school holidays. One day I found some golf clubs in his closet and I went out and played at Chiltern… with the snakes!”

Born in Coburg in 1934, Deveson’s parents divorced a year later and he was raised by his parental grandparents. “They were true-blue Aussie battlers. Both were in their 70s when they took me on, but I had a bit of fortune. There were three brothers who lived next door, called the Jones family, and they were all about my age, well-groomed and very athletic. I’m the bloke who invented the phrase, ‘Keeping up with the Joneses’! But my background made me all the more determined to be successful in my own marriage.”

He described his wife, Mary Ellen, as “a beacon of inspiration”.

“She’s a Mexican-American and has been my partner for 38 years. Five children, four grandchildren and 21 houses later, we’re still going great guns.”

At the par-four, fourth hole, Deveson showed his determination. From a difficult lie he fluffed his third shot into a yawning greenside trap. And he stayed in the sand for quite a while. As we were not playing for sheep stations, I thought he might have picked up. Not Ivan Deveson. With each shot left in the trap he shook his head and stepped up for more.

He holed out for an ugly nine and, with the hint of a smile, described Heath’s bunkers as “character-building”.

Deveson began a 32-year career with General Motors in 1955 and left Australia in 1958. He did not return until the early ’80s. He worked in Belgium, Denmark, Mexico, South Africa and the United States.

“It was a great experience. At the start I went to Stanford University for a masters degree on a scholarship paid for by GM. It was a bit of magic, living and studying in California. I met Mary Ellen at the General Motors Institute in Detroit, which was GM’s own collage.”

This was when he moonlighted as the entertainment on Sunday nights at a bar. He has since had little time to devote to the piano, but remains passionate about jazz and is the driving force behind a new Melbourne jazz festival.

Along the way there have been stints at Nissan as chief executive, and chairman of Channel Seven. He has always been a “grassroots” executive and now, as Lord Mayor, remains a man for all seasons. “It’s quite incredible. One day it might be homeless men at the Gill Memorial or residents disturbed by local initiatives, then city business people, government people, diplomats, consuls or their visitors.”

Not all visitors have received a warm welcome from the Town Hall. Last November, Michael Jackson’s entourage claimed it was snubbed. “I was offended by what his organisation tried to do. They promised a donation to charity then, at the last minute, withdrew that and said they’d take up a collection at his (Myer Music Bowl) public appearance. His fans are entitled to think what they like… we thought it was fair.”

Though Deveson fired his shots nicely into the air, direction was his problem. As a result, his short game suffered. He had a monster putt at the eighth that caressed the side of the cup and stayed out. That gave him an eight, but he retained a spring in his step.

Many people think Deveson’s nine-person council controls solely the central business district. In fact, the city’s borders reach from north of Optus Oval down to Fitzroy St, St Kilda, and from Flemington and the Showgrounds across to Punt Rd. Aside from dealing with issues from this area, there are countless hours spent at official functions, usually three to four nights a week.

Deveson finished with a bogey five at the ninth for his second-best hole. He had scored 60, 24-over-par, but described the experience as “really enjoyable”.

As we made the long trek from the ninth green back to the clubhouse, I raised the saga of Swanston St. “I don’t think it’s right to even think of it as a walk,” he said. “It’s a big problem at night.”

The Lord Mayor sees it as part of a bigger picture.

“I’ve got two years left. I’d like to really turn around the social problems on the streets. The homelessness, the youth issues, the unemployment, the drug problems, city safety… I’d really like to leave my mark on that side.”