Posted at 04:09h in TEE FOR TWO by PeterMitchellMedia 0 Comments
0 Likes 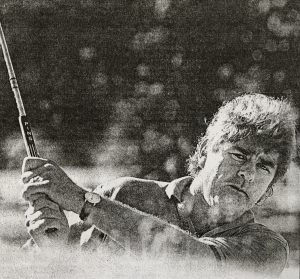 With a quick swing and playing off a seven handicap, Paul McNamee shows his competitive instincts are as strong on the golf course as they were on the tennis court.

It came as no surprise when Paul McNamee suggested our casual nine holes at Yarra Yarra count for something.

“How about we play for drinks… or just the honour?” he said.

We agreed to the latter and he gave me five shots over Yarra’s wonderfully prepared back half.

He plays off a seven handicap and is a long-time member of the National at Cape Schanck. A left-hander with a quick swing, he struck the ball beautifully with a gentle draw. He found the trees with his opening drive and carefully chipped out to salvage a bogey.

McNamee’s competitive instincts are as strong as they were when he played in two Davis Cup winning squads for Australia in the 1980s.

He became a professional tennis player at 19, yet earned a career-best singles ranking of 24 when he was 31.

He took the early lead but a poor chip and three putts left the match all square after four holes.

I asked about his best finish in the Australian Open. He looked at the ground dejectedly. “I had match point in the fifth set against (Johan) Kriek in the semi-finals at Kooyong in 1982.”

Now instead of trying to win the Open, at 43, he’s running it. And it is attendance figures that interest him more than the scoreboard numbers.

“391,504” he said proudly, without referring to notes. “That was the total attendance figure at this year’s Open. We broke the record for the second year in a row.”

Next January, McNamee desperately wants a hat-trick. “We are by far the biggest Australian sporting event.”

What about the Formula One Grand Prix?

“We’re bigger. We run over two weeks. The Grand Prix gets about four hours coverage.”

Next year, for the first time in more than 25 years, the tournament follows the other three grand slam events, The French Open, Wimbledon and US Open, by not having a naming rights sponsor.

“Ford will continue as the major sponsor… this is a strategic move to consolidate our global status.”

At the par-four 14th, McNamee played a wonderful six-iron approach to within two metres. His birdie putt slipped by the hole. “You dog,” he muttered, although he had taken the lead.

McNamee grew up as the third of four children, with two brothers and a sister. While they have become teachers, lawyers and pharmaceutical company bosses, McNamee’s passion has always been sport.

“Dad was born in Tarnagulla, up near Bendigo. We used to go up there pretty well every weekend, and we’d always play sport. Even though we grew up in Melbourne we always had that country connection.”

McNamee attended St Bernard’s College in Essendon and was known as the nephew of Bomber legend and Brownlow medallist Dick Reynolds. Soon he was known for his own sporting prowess.

”I was into all sports, but mainly tennis and golf. I remember mum and dad sat me down when I was about 12. They said, ‘Play everything, and perhaps concentrate on the one that you really like. Which one would that be?’ I told them that I loved tennis most of all.”

At the 454-metre par-five 16th, with our match square again, I could have disqualified my opponent. I noticed a 15th club in his bag.

”Oh yeah… that belongs to Rowan,” he said, laughing.

Rowan is his two-year-old son, and it was a small plastic driver.

“He’s amazing. He would have put that in there. All day he just walks around with a tennis racquet in one hand and a golf club in the other.”

McNamee has been married to Lesley for seven years. “I met her in Melbourne when she was working on the Hopman Cup in its first year. We’d known each other for nine months when we got engaged.”

It was as co-founder and tournament director of the Hopman Cup, the international mixed teams event, that McNamee earned his entrepreneurial stripes.

He has been Australian Open tournament director for three years and the head of marketing for the past two. He was instrumental in having a clay court built at Melbourne Park. “All the old Australians grew up on clay and we got away from that. That’s why the Europeans are so good. They’re learning how to move and use the angles. You’re basically learning how to play chess.”

It was also his idea to create a more “Australian Open” championship, right down to serving pavlova instead of cheesecake at one charity dinner.

“The men’s final this year, between (Pete) Sampras and (Carlos) Moya, was in many ways a one-sided match, but it’s important that people don’t leave wanting more. We also had carnival music on arrival, a great mixed doubles final, the garden square and all the entertainment, including beach volleyball and live music…. I’ve learnt some hard lessons over the years about not leaving the public feeling like they’ve been short changed. Pure sport just doesn’t cut it these days. That’s the bottom line.”

I asked him who was the best player he had seen. His answer was rifled back.

“McEnroe, without a doubt. On all surfaces, he was an all-round player. A genius. He’s also far and away the best commentator on television. He has no peer!”

What about the women?

“I find it hard to split Martina (Navratilova), Steffi (Graf) and Monica (Seles)… and Chris Evert, too. There’s not one who deserves to be greater than the other.”

His birdie putt at the par-five 18th lipped out and McNamee finished with an eight-over 44.

We shook hands after an honourable draw.

He mentioned he recently signed on for another three years with the Open. “This year’s figures were staggering,” he said. “An estimated 21,821 visitors came from interstate to Melbourne this year, and 13,788 from overseas. Around 610 million people watched the event worldwide on television.”

McNamee knows what is required for a smooth TV broadcast.

In 1986, at Kooyong, after Pat Cash had secured the Davis Cup for Australia by defeating Sweden’s Michael Pernfors in a five-set classic, McNamee was required to finish the final with a dead rubber against Stefan Edberg.

“It was like eight-all in the first set when I was given the message that the match was getting too long. They wanted to make the presentation. Can you believe that? Dead rubber or not, there’s some pride there, you know?”