Posted at 02:17h in TEE FOR TWO by PeterMitchellMedia 0 Comments
0 Likes 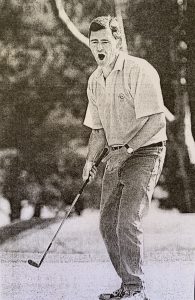 Opposition Leader John Brumby dresses down for a day among his fellow travellers and tests the reception from the club pro.

His response was the same when I asked about a game of golf.

As I discovered, once he alighted from his chauffeur-driven car at the private Medway Golf Club in the bosom of Labor territory in Maidstone, it was a challenge, indeed.

The Leader of the Opposition was wearing jeans and runners.

As we limbered up on the 10th tee, a par-three of 166m, we were stopped by the club professional. “Uh oh, I’m illegal am I?” Brumby said. The pro looked like he did not know where to start. He asked about the Opposition Leader’s shoe size, then focused on his flimsy buggy.

It was replaced with a wide-wheeled club version and a diplomatic blind eye was turned to the jeans and runners. Clearly rattled, Brumby started with a triple-bogey. On the 11th tee, I took time to remark on his astonishing set of clubs.

Housed in a modest vinyl bag, they were few in number and varied in brand name. There was a three-wood with wrinkled electrical tape hanging from the head.

Another that was a collector’s item! It must have been around 60 years old. It had the autograph of the 1935 US Masters champion Gene Sarazen etched into its head. “Yeah, they’re all mainly dad’s old clubs,” said Brumby.

“Mum went through a stage when she gave me a club every year for Christmas. I’ve never had a full set.”

He is well aware he needs to update. This was pointed out recently by football identity Peter “Crackers” Keenan. “I was down at Riverside (driving range on the banks of the Maribyrnong River), hitting balls at the practice net and Crackers came up and said: ‘Gawd, Brumby, you can’t be seen on a golf course with a set of clubs like that!’ He said: ‘I’ve got a mate who’ll get you a beautiful set at wholesale price, $600.’ I’m still considering the offer.”

Several of his clubs had old-fashioned leather grips and, on one tee, Brumby actually spat on his hands and rubbed them together before hitting. As the Opposition Leader started to settle down to a consistent run of double-bogeys, I asked about his golfing background.

Brumby says his parents a farm down at Coleraine… “I’m the eldest of four children. One Christmas, years and years ago, I played a few games at Balmoral, the local golf club. Its a beautiful little country track out among all these magnificent, huge red gums. Birds and kangaroos all over the course. That was the last time I had a regular hit. You can probably tell.”

Is it a big farm?

“Oh, with dams and everything I suppose it’s a couple of thousand hectares. They’ve got a Hereford stud and a few thousand merino sheep. I spent a lot of years working there when I was a kid, hay carting, crutching sheep. Moving there was the best thing dad ever did.”

Medway’s a picture postcard tucked in alongside the Maribyrnong River. Happily, there are not many places where you can lose a ball, yet its back nine, with immaculate, sloping greens, proved a tough proposition.

“Beautiful spot here, isn’t it?” said Brumby to a couple walking past.

An elderly gentleman was not interested in aesthetics. “I can’t bloody stand Kennett!” he said. “I’ve been a Labor voter for 50 years and I’m not ashamed of it.”

“Good on you,” said Brumby.

On several occasions, we were stopped by well-wishers. Two elderly women, straight out of Fawlty Towers, walked across one fairway.

Forget the swinging voter. For those swinging clubs at Medway, Brumby was their man.

“I should play here every week,” he said, chuckling. “I’d win in a landslide!”

“Whaddya reckon I oughta hit here?” he said after duffing his tee shot at the difficult 13th, a 234m par-three that is all downhill.

I suggested he bump a five-iron down into the valley and let it run towards the green. He topped it again.

He finished with another double-bogey.

Like his father, Brumby studied commerce at Melbourne University, but then switched to a diploma of education.

His first job as a teacher was at Eaglehawk High School in Bendigo. He became actively involved in the school council and developed an interest in politics.

When Bob Hawke was elected to power in 1983, Brumby, at the age of 30, became MHR for Bendigo. After losing the election of 1990, he decided to move from federal to state politics, seeking a quieter life and more time at home.

But when Jim Kennan resigned in 1993, Brumby was reluctantly pushed into the boss’ chair. To the surprise of many, he has survived as Opposition Leader for four years.

Medway’s par-five 14th has a volcano-like green and plenty of trouble at the back. Brumby’s ball found an impossible lie nudging the out-of-bounds fence that runs alongside the Maribyrnong.

For the Labor Party leader, he played an awful lot of shots to the right. As we were not playing for the “ault claret jug”, I told him he could take a free drop. He under-armed his ball generously back into play.

Recently turned 44, Brumby lives in Strathmore with his wife, Rosemary McKenzie, and their three children.

“Rosemary uses her own surname. She prefers it that way. She’s a lot smarted than me. Did her HSC at Bendigo High, was dux of the school and averaged 99 per cent, which is a lot better than I did. She has done an arts honours degree and is about to get her masters in public health.”

“We moved in just before last Christmas. It’s old art-deco. I spent a fair bit of January on the end of a paint brush. It’s pretty small, so we’re looking at extending.”

As he bogeyed the par-three 17th, Brumby spoke of the lessons to be learned from history.

“Take John Howard and Jeff Kennnett. They were both, at one stage, held in very low regard by the public. Malcolm Fraser, as (Federal) Opposition Leader in 1975, was extremely unpopular. Things can turn around.”

We came to the final hole and, for the first time, my partner had the honour. He pulled out his Gene Sarazen club, but skulled his drive along the ground.

From Brumby’s reaction, “Crackers” would no doubt have received a call that afternoon.

The Leader of the Opposition still managed to secure an excellent bogey, but only after ramming a curling four-metre putt into the back of the cup. He jumped high and punched the air, letting out a roar of approval.

Before he darted off to change his jeans before his next official engagement, I wondered if his job was safe until the next election.

“Well, they’re a fickle beast, the Victorian branch, but under the present arrangements, I can’t remember a time when the leadership position has been more secure. The perceptions have changed. I do look ahead… I don’t anticipate any changes before the next election and I think we’ll do pretty well. The big question is: ‘Do we get across the line?'”