Posted at 00:51h in TEE FOR TWO by PeterMitchellMedia 0 Comments
0 Likes 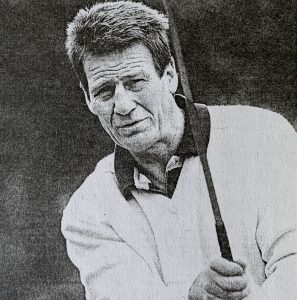 Sam Newman might have been a golfer if football had not claimed him. But his latest accident has put the TV star out of action.

Sam Newman does not know when he will be able to play golf again.

With his serious leg injuries, it is almost certain he will be unable to represent Victoria in October’s BMW amateur classic at Queensland’s Hope Island resort. His doctor has told him as much.

A win would have seen him representing Australia, something he was never able to do as a Geelong champion.

On one of the last occasions he played golf before last weekend’s accident, Newman joined me for a round over Yarra Yarra’s sublime layout at East Bentleigh.

A 51-year-old in tremendous physical shape, he clearly loved the game.

“It’s the only relaxation I get,” he said.

With a handicap of seven (he was once off three), he warmed up with some vigorous practice swings on the first tee, then suggested a match.

“How about we play for a favour?” he said.

I agreed, and asked for a stroke a hole. He happily acquiesced.

He pulled out a four-iron at the par-three first of 201m and knocked his ball to within six metres.

I had been told Newman could have chosen a career in professional golf instead of football. He would have preferred it that way.

“By far and away,” he said. “It would be one of the most idyllic pastimes you could engage in. Traversing the best real estate in the world in wonderful weather and getting paid a lot of money for it. What could be better?”

Before we left the first tee, four elderly women played through, telling us they had to finish their match. They seemed in a hurry, that is, until they recognised Newman. At least half the party blushed, and Newman, awkward but polite, laid on the charm.

I wondered how he had coped with his popularity from The Footy Show.

“I’m no different, at all. I’m not saying I’ve become famous or infamous,” he said. “I’ve never got carried away, or stroked myself over the success of the show. This business, more than any going around, would be the most fickle. I understand that.”

What about the public?

On the next fairway I said that with my handicap of 15, and his seven, I should only be receiving eight strokes.

“Yeah, I’ve been thinking about that,” he said. “But I’ll still beat you…”

We talked about football injuries. His words were prophetic.

“Last year I had my ankle operated on for the fourth time – a legacy of football – and the surgeon, John Bartlett, said, ‘If you go over on it again, that’s it’,” he said.

At the third hole, a par-four of 296m, Newman took an iron from the tee and pulled it into the left rough.

He recovered to put his approach on to the green and, with a cross-handed putting grip, rolled in a curling, lightning-fast, four-metre downhill putt for birdie to go one up.

He pointed to a spot beyond the hole and said: “That’s where it should have ended up!”

At the par-four fifth, 402m, Newman, with a beautifully rhythmical swing, played a long drive that split the fairway, then followed it with a glorious long-iron. Again, he missed the putt.

He thrust his putter back into his navy, all-weather bag, emblazoned with The Capital Golf Club logo. The bag, holding his Mizuno clubs and Biggest Bertha driver, was a gift from Crown Casino boss Lloyd Williams.

Four times he has been invited to play Williams’ exclusive course at Dingley – once with Premier Jeff Kennett. I had heard reports the Capital was a special place.

“It’s faultless. It has lakes and waterfalls, and is just meticulously groomed,” he said. “The clubhouse would make the Beverley Wiltshire in LA look like a room at the YMCA. Without exaggeration. They have people who drive the cart for you, people who clean your clubs, the food and beverage cart that follows you around, people who put green-coloured earth into your divots. If you like playing golf, it’s the closest thing you can find to paradise!”

Perhaps Williams was not joking when he said he would be happy to sponsor Newman on the Seniors Tour. “Of course Lloyd was joking,” Newman said. “It’s the putting green that counts. That’s what the game’s all about… and that’s where I struggle.”

Could he recall his first game of golf?

“I know you’ll think this is an extravagant statement, but a friend and I started our golf down at Point Lonsdale under the watchful eye of Peter Thomson,” he said.

“He’d won a British Open or two by then. We used to follow him around and have a hit with him. We were a bit unusual. I was probably eight or nine. My father used to play a bit.”

His father, who spent 40 years at Geelong Grammar as a teacher and headmaster, is now 92. His mother is 91.

People forget Newman was a football great, playing 303 games with Geelong from 1964-80, winning a best and fairest, and becoming an All-Australian ruckman.

You sense it irks him when people only remember the white boots and the “300th game in a dressing-gown” story.

“The story is that Bill Goggin, then coach, wanted me to start (against Collingwood) on the bench. I ran through the banner, sat on the bench for about 10 minutes, then played the rest of the game at centre half-forward on Rene Kink. It has just been blown out of proportion that I sat on the bench for the whole game.”

Goggin came in for a serve. “I thought it was an unusual move on Bill’s part. I mean if you weren’t ready to play on your 300th game, you’d never be ready, so why pick me in the first place? That was Bill. He dabbled in amateur psychology and then gave it away after he lapsed into a coma one day, because a butterfly landed on his head and sent him into a tailspin!”

Several times during our round, he was hard on himself. At the 10th, he lost his third ball for the round. Soon after he played an approach into a greenside trap.

What is it about the game that attracts him? “It calls on the complete opposite of what most sports are about,” he said.

“The more annoyed, and the more adrenalin you get in any other sport, you can use to your advantage. In golf you can’t. The more fired and pumped up you get, the calmer you have to be in golf, so it’s a complete contradiction.”

Nearing the end of our round, he showed he was not adverse to a little gamesmanship. I found myself one up as I addressed my ball on the 16th fairway.

I was about to start my backswing when I heard, “Well it’d be handy not to put this one in the trees!”

I ignored him and managed to hit it down the middle.

He did not find the trees with his second, rather a bunker about 50m from the green.

Faced with one of the toughest shots in golf, the long bunker shot, he pulled it off magnificently. His ball skipped well up to the hole and stopped dead about a metre away.

It was the shot of a professional. I applauded.

Newman looked at the ground as he smoothed out the bunker, “Yeah, got that one OK.”

Newman went one-up after a bogey at the 17th and as I passed him the flag he looked me in the eye and said, “I love going one up after 17, because it means you can’t lose!”.

We were solid from the final tee and I wondered whether he was misunderstood.

“Basically, my philosophy is send yourself up first, then have a go at everyone else,” he said. “I give it out and I cop it, and I’m quite happy for that to happen.”

I hold a big putt at the last for a win and our match was drawn.

“Well done,” he said. “Thank you very much for the game. No favours, huh?”

He said he would send the card to his home club of Riversdale. “Your handicap has to reflect your game,” he said. “Otherwise, you end up losing too much money!”

Waiting for his driver, he wondered what my favour might have been. I said there was nothing in particular, although I was thinking of those front gates at The Capital.

“I would have probably asked you to clean my clubs or something,” he said.